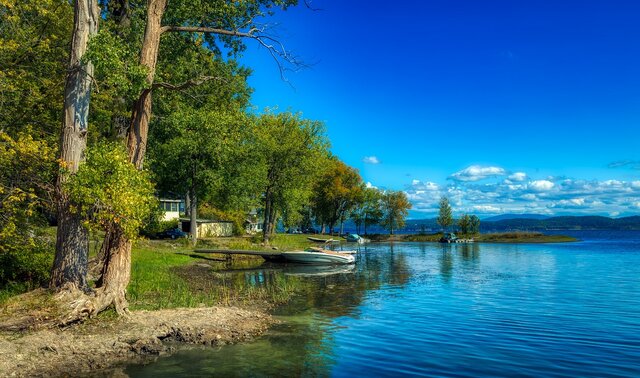 Lake Champlain sits along the New York-Vermont border, and part of it even stretches into Quebec. You have some monstrous carp here that average over 20 pounds. You have a real opportunity to catch them at over 30 pounds, which makes it a perfect spot for bowfishing. In fact, it’s one of the best locations to go bowfishing in New York and Vermont.

Let’s put the bowfishing into perspective here with the Vermont state record, a 44-pound carp that Taylor Patterson, a bowfishermen, shot on May 20, 2014. One of the great things about bowfishing is that even when the fish aren’t biting, you can force them to take your arrow. Patterson says that he saw the carp swimming in the water below the surface of flooded trees and took aim. A 20-minute struggle ensued but Patterson reeled it in over the boat in the end.

We highlight this record to show you how you can fish for some monstrous carp and other fish on Lake Champlain. Since carp aren’t considered game fish, you can shoot as many as you can take off the lake.

What Can You Bowfish on Lake Champlain?

You have several species of fish that you can target on Lake Champlain, depending on the stateside that you fish from. In New York, you can only target the common carp. With a Vermont fishing license—which we would recommend over the New York license—you can target the rough fish, such as:

Lake Champlain allows you to bowfish for Northern Pike for a short season from March 25 to May 25 in Vermont. You can shoot them with either a gun or a bow. We find that interesting because this marks the first time that we have ever heard of being allowed to take fish with a gun.

Before you would undertake this, however, be aware of the local laws and if anything changed recently since you want to know exactly before you would try that. As far as we know, Northern Pike are the only fish here that you can take with a gun, and you need to be in Vermont to do it. We would recommend learning more before trying it.

You might imagine the species as being invasive here since they allow you to bowfish for it, but in fact, Northern Pike, while not common in the rest of New England, have had a historical population in Vermont set in Lake Champlain.

The diverse number of species that they let you shoot here makes bowfishing a blast! However, if we had to pick out one that you might want to specifically target, we would recommend the carp since they have some huge carp on this lake. Along with them having the state record on carp, Lake Champlain in New York holds the state record for bowfin and longnose gar.

Where to Bowfish on Lake Champlain from Shore

Bowfishing on Lake Champlain, try the rocky and sandy shorelines because of how it holds in the heat from the sun and attracts the carp who like to sun themselves in the warmer water. If you had to bowfish from shore, this would greatly improve your chances. Bowfishing is almost always done in water from 2 to 3 feet deep.

Be aware of the longnose gar on this lake because of how they can throw you off when you start shooting. They sit up higher in the water unlike the carp, which means that you shoot with a different calculation of light refraction. In 90 percent of cases, you can aim straight at the gar—just consider depth before taking the shot if farther down. In many cases on this lake, you find them right near the surface. The gar’s thinness makes it similar to shooting a pencil at a pencil, but it’s a lot of fun.

What to Be Aware Of

If bowfishing on the New York side, you will need a New York fishing license to legally bowfish there. Beware of going into the Vermont side because of how it can potentially get you into trouble with the DNR. The same goes for if you plan to bowfish from the Vermont side of the lake—you will need a bowfishing license from that state or it can land you in some problems if you bowfish.

I would also exercise caution about trying to bowfish in Canada without the proper permits since the laws may differ, and I don’t know about there, but I have heard of how they can seize your boat if you go over the border lines.

Bowfishing Lake Champlain: What to Know

Lake Champlain covers 271,000 acres, and it ranks as the eighth largest naturally occurring body of water in the United States. You can get some big waves on Lake Champlain, and you will want a larger boat. It is also prone to wind gusts and large amounts of debris like submerged logs.

Considering how bowfishing often happens at night, you need to exercise caution with your boating speed and stay alert to the dangers on the water. Go slowly and watch closely, and you will be fine. Just take precautions like how you would with any other lake.

We would also recommend the Vermont fishing license because of how, along with being able to shoot more fish species, it gives you access to a better and more exclusive part of Lake Champlain where the bowfishing is even better. The more you shoot, the better you get at the sport.

Lake Champlain offers a couple of bowfishing tournaments, such as Pelkey’s Green Mountain Throwdown Bow Fishing Tournament.  You have a lot of giant carp that you can take on this lake. Since they have no limits as an invasive species, you can shoot as many as you’d like. Most on Lake Champlain don’t consider carp invasive here even though they’re not native to the lake.

What is the Season for Bowfishing on Lake Champlain?

Unlike in other places, you can’t bowfish on the lake year-round, and the season runs from April to October, depending on the year. Check in advance to ensure that you bowfish within the boundaries of the season. Whether you bowfish in New York or Vermont, the season runs for the same amount of time as far as we know.

How well you do on this lake will depend on the year because some years will have more carp than others, but that’s the advantage of going with the Vermont license as well. If you can’t find the fish from one species, you can go after another.

Especially if you come from out of state and want to try the sport, going with a charter can help a lot. You don’t need a boat to go out, and it will typically cost from $300 to $600 for a bowfishing trip. Check in advance to see how many people the boat can hold to make sure that it meets your requirement. Some bowfishing guides prefer to take three to four people out since it keeps less crowding in the boat.

The advantage of going with a guide comes from how they know the lake and where to go for finding the carp and other fish that you would target. You can figure this out yourself, but it’s helpful to have an expert show you where to fish.