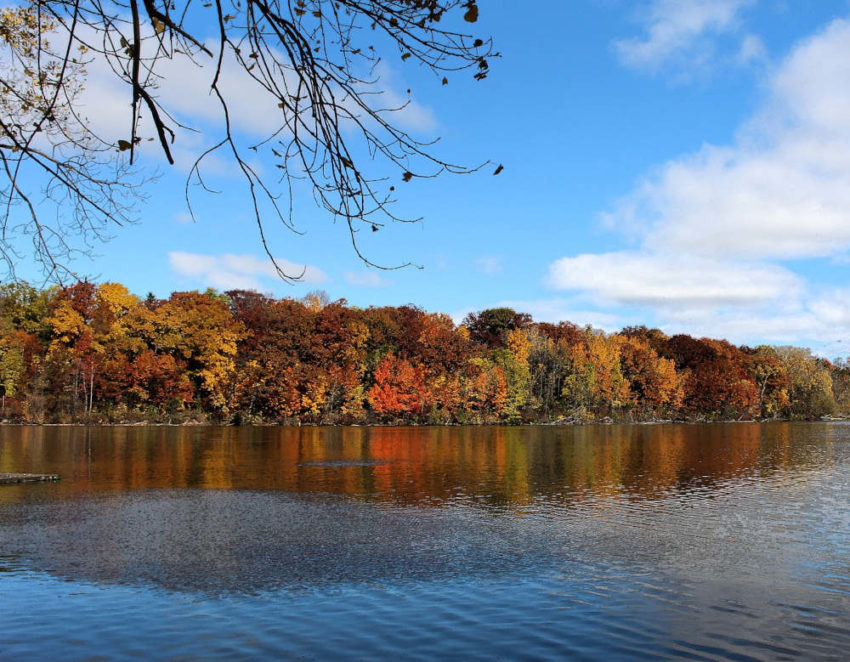 Wisconsin offers ample bowfishing opportunities for rough fish, and with a variety of lakes and streams with easy access, it makes it well worth trying here. Some even like to go bowfishing in January here as the lakes and rivers freeze over. You have plenty of diehard bowfishermen in the state. Let’s have a look at how to bowfish in this state, the laws and regulations and some of its best bowfishing lakes and rivers.

Bowfishing in Wisconsin is legal. Getting started just requires a fishing license. You can learn more about the cost of fishing licenses here. After you have a bowfishing license, the state allows you a broad selection of fish that you can go after, such as:

Nothing in Wisconsin will trip you up as far as bowfishing regulations go—they remain simple. Check the laws ahead of time if you have any questions. We do find that bowfishing laws pose more difficulty than regular fishing because of how the DNR agents sometimes don’t even know the laws.

Keeping a rulebook on hand can stave off unfriendly visits from the local authorities who don’t know the law themselves.

In 2017, Wisconsin legalized bowfishing for catfish with few regulations around it. The lack of seasonal structure put their populations at risk of overharvesting. They don’t have a size limit for the catfish that you can shoot. However, they did set a bag limit where you can only take five channel catfish per day and one flathead catfish per day. These rules were set as emergency temporary rules back in 2018, so we would advise looking up the current rules if you decide to go after catfish.

When is the Wisconsin Bowfishing Season?

Every spring of the year, the Wisconsin Bowfishing Association hosts tournaments for the sport. Still a relatively new organization, they established this group in the late 1990s. We would advise that you check with them to learn about the tournaments in Wisconsin. You can do that here.

We also like that they keep records and talk about the bowfishing regulations in Wisconsin. You can also become a member for $21. Your membership fee will support the sport while protecting, expanding and educating bowfishermen. It will also help with putting together the tournaments. People who win at the tournament will collect their awards in an award ceremony.

In some cases, even individuals from the surrounding states come together to compete for cash prizes.

To put into perspective how big the tournaments become, one team won a tournament after shooting 600 fish in 10 hours. Since rough fish have no limit in most cases, you can take as many as you want, and in fact, they especially encourage this with carp since they’re an invasive species.

Wisconsin holds its biggest tournament listed as the Wisconsin State Championship Bowfishing Tournament. They hold it at the Castle Rock Flowage in Central Wisconsin. To join the tournament, you must be a member of the Wisconsin Bowfishing Association.

Other tournaments that you might do besides Castle Rock include:

If you’d like to see what a bowfishing tournament looks like, check out the Wisconsin Green Bay Tournament below:

Where to Bowfish in Wisconsin: The Lakes

Some of the best lakes to bowfish in Wisconsin include:

The carp in Poygan Lake are especially abundant, and you can find them in the shallows. This would be one of the locations where you can bowfish right from shore and shoot plenty of carp. Along with the carp, you can also pull up some gar. Head here in the early mornings of early to mid-June, and you will spot the carp spawning in the shallows.

Like with Poygan Lake, Lake Winneconne has a lot of gar and carp on it for shooting. In fact, all the lakes mentioned above are connected together through a collective known as the Winnebago system. They’re known as the “upriver” lakes and cover 27,466 acres. That also explains why a lot of the fish that you will find in Poygan Lake will also be present in the others.

The Winnebago system has a tournament on it worth checking out, and you will find tons of carp on Lake Winnebago. Some people would prefer if you would strictly target the carp, but they do have gar and bowfin here. Still, the region hopes to keep the dogfish and gar because they prey on the carp, which have become a real problem in recent years. You will find how some of the diehard bowfishermen in Wisconsin will keep targeting the carp straight through the winter season.

An 8581-acre lake, Lake Butte Des Morts belongs to the Winnebago system, and it has a maximum depth of 9 feet, making it the perfect bowfishing spot since bowfishermen like to fish in shallower water.

On the lakes, be aware of how the carp tend to group together, and where you see one carp, you will often see others. The advantage of carp huddling together in groups like this comes from the fact that you can shoot into the group of them without aiming as hard and still hit them.

Last but not least, we would consider Castle Rock Lake one of the best bowfishing spots in Wisconsin, and it even has a tournament. A lot of Wisconsin locals drive from afar to come bowfishing here. A lot of people bowfish for common carp, but you have many stories of people pulling out gigantic fish here.

Check out the video below to better understand the sizes of the monster fish here:

Let’s say that you want to go bowfishing on the rivers in Wisconsin. Where would you go? Some of the popular rivers in the state include:

Boasting millions of carp, the Rock River runs through Watertown, and like many of the bowfishing opportunities in Wisconsin, you can walk away with some monstrous carp. They also have their fair share of buffalo in this river. We would consider this an opportunity in the southeastern part of the state.

The shallow stretches tend to sit right below the dams, and dams anywhere have always proven a bowfisherman’s best friend. You have a lot of areas here at 1 to 2 feet, but some of the areas have a hole that can go up to 3 feet. This is prime bowfishing real estate because you need shallow water to pull it off. Especially during the summer season, this area becomes shallower to where you could shoot them even more easily.

Beware of the rain here because of how it can impact the clarity of the water. Most of the carp you see here won’t be trophy size, and they will range anywhere from 7 to 8 pounds on average. Keep in mind with all of the bowfishing spots mentioned, this is by no means an extensive list, but it gives you an idea of where to go bowfishing.

Flowing for 115 miles, the area where we would recommend hopping in with bowfishing is right around the Princeton area, located in Central Wisconsin. I know of tons of people who come to this area for bowfishing. You can see them bowfishing right on the Fox River here:

Bowfishing for Carp in Wisconsin

In Wisconsin, bowfishing during the day has been legal for years. Only recently did they allow you to bowfish at night with lights. Carp has become a popular choice for what people shoot in Wisconsin. Unfortunately, the invasive species have a harmful impact on our nation’s environment. They eat the aquatic plants so that native fish species starve, and they pollute our waters by stirring up the muck and mud. Carp prefer to hide in muddy water.

Most bowfishermen will go after carp because they have them in such abundance, and it does a public service for our nation’s environment. Wisconsin offers plenty of opportunities where you could bowfish from shore.

The state bowfishing record for the biggest carp shot in Wisconsin was at 59 pounds and shot by Zack Seitz, an 18-year-old at the time of the record. The carp was 46 inches long. He shot it on Long Lake in Fond Du Lac County.

If you take to the shores near a dam, you will find it chock full of fish in many cases. I know of many bowfishermen in the state who say that one of their favorite places to bowfish is right down near the dams. You don’t necessarily need a boat to do it. You do, however, need a bow, and if you would like to buy one specifically for bowfishing, I would check out the article I wrote here on the best bowfishing bows.

Wisconsin offers an ample amount of opportunities when it comes to bowfishing. You shouldn’t struggle to think of places to bowfish here, and the sport has exploded in popularity in recent years within the state. Plenty of people love the sport, and it has only been growing. That has benefits since we’re looking at ways to control the carp populations, which can be destructive when they get out of control.

If you enjoyed this state guide and would like to learn about bowfishing in another state for a possible tour out of state one day, we’d recommend checking out our guide on bowfishing in Louisiana.