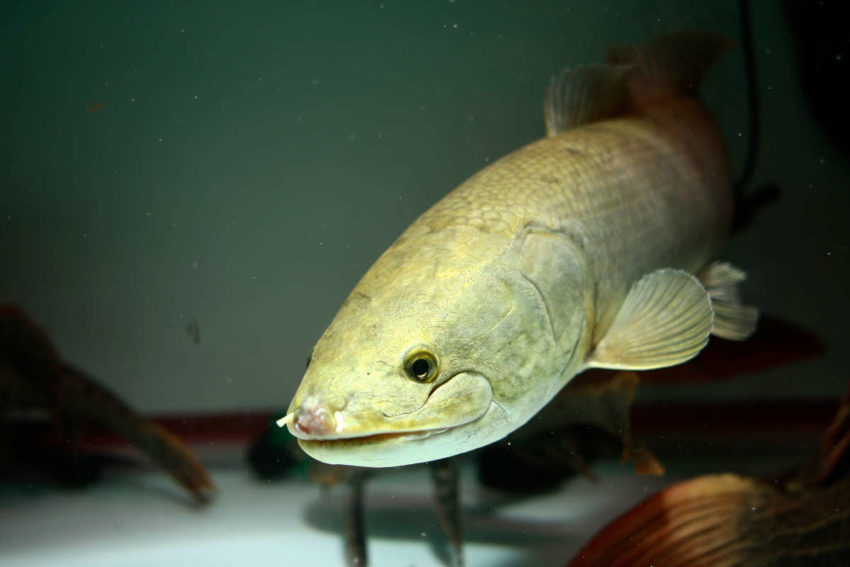 Throughout the Midwest, including in Minnesota, they call the bowfin fish the dogfish. In fact, this fish has many names depending on what region of the United States you live in. In Minnesota, like in many of the other regions of the United States, the bowfin has developed an infamous reputation as a fish that you don’t want to catch. The usual reaction is cringe and dislike for the fish on the end of the line. Is that reaction justified? Some people in Minnesota actually like to target this fish for its hard fighting.

Believe it or not, despite their unsavory reputation, freshwater dogfish are a sign that you have healthy water. You might think of the dogfish as a lake cleaner because of how they will clean up the dead fish to keep the lakes free from parasites. It’s a fish that is also native to Minnesota. You can find this medium-sized greenish fish throughout the clear lakes and slow-moving rivers of Minnesota.

Dogfish also have the ability to survive in murky and less visible waters with less oxygen. This is due to the fact that they can gulp air into their bladders and survive for between two and three days. This fish existed long ago when dinosaurs walked the earth.

Where Can I Catch Bowfin in Minnesota?

You can find the dogfish almost everywhere here. Some of the best places where you can go to fish for dogfish in the state include:

We would recommend that you check slow-moving rivers or areas with backwaters since the dogfish loves to hang out in areas like that.

Check out this video of someone catching a dogfish on the Mississippi to get a better idea of where to hunt for them:

The video shows you the amount of excitement you can have from catching bowfin as it puts up the fight of its life.

Dogfish aren’t so rare on the St. Croix, and you can catch some monstrous sizes there. You have stories of people fighting dogfish so fierce here that they almost ripped the rod right out of their hands. You can learn more about the St. Croix in general here.

Looking at the drainage area for the Red River basin, it covers 40,200 square miles, and it encompasses northwestern Minnesota and eastern North Dakota.

Can You Eat Dogfish in MN?

Many people don’t like the taste of dogfish, but you need to prepare them right to taste good. Without the correct preparation, they will taste mushy and like mud. It’s one of the reasons that they sometimes call this fish the mudfish in the South. Cooked right, they can taste as good as any other fish, and in some cases, people like them more than many other fish species.

It’s a finicky meat that requires exact preparation and avoiding certain things or it won’t taste good. If you’d like to learn more about how to eat dogfish correctly, I wrote about that here.

Fish farmers have also begun to farm the dogfish for its caviar. Bowfin black caviar has become increasingly popular, especially in the South.

The largest dogfish ever caught in Minnesota was 11 pounds and 12 ounces and a 30-inch dogfish that was caught by Brandon Burns.

Anyone who loves to catch bowfin in Minnesota may want to check out the Minnesota Bowfin Club on Facebook. We did notice they’re not active online anymore, but we don’t know if they still have the club going on or not. You may even be able to find others if you have a passion for this fish.

The fish has plenty of haters, but some people respect it for the hard fight that it gives once you put it on your line. Membership is free and open to anyone who would like to join.

These fish are so fierce that their teeth can bite a hole right through a rubber net. Their conical teeth are attached to their skull, and they have a mouth full of teeth. You wouldn’t want to get a finger caught in their mouth. They’re known for destroying spinnerbaits and lures because their teeth are so vicious. On top of that, they have a jaw that’s equally as vicious.

The one thing about state records for dogfish is that few people think of it as a fish that can give them the state record. For that reason, you have a lot of people who will crank in a larger dogfish and simply throw it on the shore without registering it. Catching a dogfish isn’t exactly a proud moment for most.

Can You Shoot a Dogfish with a Bow in Minnesota?

Freshwater dogfish sit among the other rough fish that you can shoot with a bow in the state of Minnesota. The other fish that you can shoot include buffalo, gar, carp and suckers. You can’t shoot the gamefish in Minnesota, but you can target fish like the dogfish all year round. Just be aware of where you can go and specific laws in certain state regions since the law varies from one place to the next.

Bowfin or dogfish like to swim in lowland rivers and lakes. You can find them in the backwaters and swamps of Minnesota as well. However, we would say that the dogfish in MN is widespread throughout the state. You can find them in almost every lake that you visit, but some lakes may have more than others. I know of this one lake there in Central Minnesota called Lake Pepin where many of the fish that you find there are either dogfish or northern pike.

One of my earliest memories of this lake was finding a dogfish left up on the shore of the lake. I’ll never forget how it had a mouth full of teeth. Many people think of this fish as undesirable, but in fact, dogfish are good for the environment. They signal that you have a healthy ecosystem.

The issue is that many people mistake them for the invasive snakehead. The two are entirely different species and the bowfin is actually desirable in your lakes. Without enough of them, the bluegill will only reach small sizes due to overpopulation. Ecosystems are highly complex. More dogfish in the water helps them to grow bigger.

Should You Release the Bowfin Back into Minnesota Waters?

When people catch this fish, they often throw it up on the shoreline because they think of it as invasive. As long as you didn’t catch the invasive snakehead, however, we would recommend that you put it back into the water for someone else to catch. Dogfish put up one heck of a fight, and they can be a hoot to catch. This isn’t an invasive species, and it has existed for around 200 million years. The dogfish has been swimming around since before the walleye or the bass.

You should release it if you don’t plan to try eating it. Some people understandably aren’t brave enough to eat this fish, and you have to cook it just right to have it taste good.

Even if you don’t want to release it, we would implore you to at least not throw it up on the shore since this creates a stinky mess for our Minnesota waters. It’s unpleasant for other fishermen who come across it or try to fish there. Instead, we would recommend either disposing of it at the garbage can or using it as garden fertilizer.

You have some people who hate this fish to an unreasonable level, and they joke how they won’t even put it in their boat. They’d rather not catch anything than catch a dogfish, which shows you the level of hatred for this species. In my opinion, the only thing that differentiates this fish from a northern pike is that it doesn’t taste good. They’re just as aggressive and they go after many of the panfish like bluegill, but because it doesn’t taste good, they often get an unreasonable level of hate.

Dogfish aren’t an invasive species in Minnesota, and we have a healthy respect for this hard-fighting fish. They’re fun to put an arrow through or hook on your line because they fight so hard. Few people will eat dogfish, but if you cook them right, they can taste as good as any of the other fish. It has multiple factors that have contributed to it having a bad reputation, and some of the things aren’t even true about it.

Minnesota is one of those states where you can find this fish throughout the state. Do you have any experience with the dogfish? If so, leave a comment below for an active discussion of this fish.

3 thoughts on “Dogfish in Minnesota: The Essential Guide”