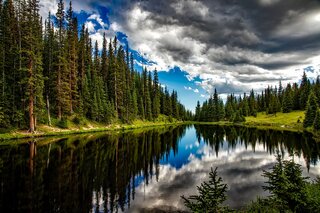 Perhaps you thought to leave your trolling motor out in the boat after a day at the lake. Weather forecasts predict rain and make you question if you should. Should you bring the trolling motor into the garage to keep it from getting rained on?

Can trolling motors get rained on? No, rain won’t hurt your trolling motor. Many fishermen go on the lake with a trolling motor while raining, and the weather doesn’t hurt it. The bottom half of the motor sits submerged in water and the top half gets spattered with droplets of water.

If you’d like to learn more, we will cover the trolling motor and how it deals with water. We will also look at why you may still want to protect it.

Protect a Trolling Motor from Rain? Depends on You…

Some people don’t risk it even though the trolling motor can withstand rain. They might bring it in the garage or put a cover over it. They may have other reasons that they do this too. For example, you may park your boat in a neighborhood where people steal the stuff out of boats. They may even attempt to steal the boat itself.

Thieves stole 4,240 boats and other watercraft in 2019, according to the National Insurance Crime Bureau. You might take your trolling in because thieves can walk off with it easily.

You can also buy a trolling motor cover to protect it from rain and other elements like ultraviolet rays from the sun. Other people put a cover on the motor because they want to lengthen its lifetime.

You have some trolling motors out there that last 10 years or more, but it depends on if you perform routine maintenance and take care of them.

I’ve personally gone out on the water while it was raining and trolled for northern pike with my two brothers and nephew. You can do it. It won’t have any drastic consequences. Watch out for lightning during rain and get off the lake as soon as possible because while rain won’t hurt your trolling motor, lightning can kill you out on the lake.

Why Cover It When Not in Use

How much care someone gives to a trolling motor also depends on how much they paid for it. On the lower end, trolling motors cost around $125, but the price can rocket to over $1,800 for a good trolling motor. When you pay that much money, you want to protect it.

Why Some People Leave It On

I’m the type of person to where I don’t feel like hauling a 65-pound trolling motor back and forth from the shed at the end of each fishing session. I like the convenience, and because I live in the backwoods of Minnesota, I’m not too worried that someone will come along and kipe it.

The Panther Marine 75-8000 Outboard Motor Lock serves as a good protector if you decide to leave the trolling motor on your boat. Some people prefer convenience. Ultraviolet rays may fade the paint, but they won’t damage the motor. At the same time, I never had an electrical issue with my motor, but admittedly, I often keep my boat parked in the garage.

Saltwater corrodes metal up to five times faster than freshwater. If you plan to take your boat and trolling motor out on an ocean trip, don’t use a freshwater trolling motor. Most trolling motors can handle getting wet, but they can’t handle saltwater if not designed for it. Rain may not pose a serious risk, but saltwater can wear down your trolling motor fast. That’s one of the reasons fishermen have to use a rod and reel made for saltwater fishing.

At the end of each fishing session on the ocean, wet down your trolling motor with freshwater to clear away its corrosive properties.

What Can Harm Your Trolling Motor…

I’ve seen some harmful but well-intended advice that you should put a plastic bag or garbage bag over the trolling motor. Don’t do this.

If you’re that worried about it, buy a trolling motor cover.

You have one serious issue with putting a plastic bag over the trolling motor. Plastics absorb water to some degree, depending on the type of plastic, which can lead to condensation inside the bag. Now, you have the motor wet not only when it rains, but you have it wet all the time. That is a problem. Even if it doesn’t hurt the motor housing, it will rot away at the parts and cause mold. Your trolling motor won’t last as long because of it. Don’t do this.

Why the Trolling Motor Will Be Fine in Most Cases…

Your trolling motor won’t put up much issue with getting wet because manufacturers usually seal the shaft so that even if dunked underwater, it wouldn’t cause a serious problem. You wouldn’t want to leave it submerged, but it shouldn’t cause an issue even if it got briefly dunked in water, much less raindrops that dripped on it for a few hours.

What Happens if the Battery Gets Rained On?

We can’t look at the trolling motor alone because you have a battery that powers it. Rain won’t hurt the battery because you use a marine-based battery. In addition, most trolling motor batteries use low voltage, such as 12 volts, which isn’t enough to pose a danger of the electricity passing through your body. Be careful of heavier voltage, however, like 220 volts, which is used in the home.

You could also buy a battery box to protect your battery from the rain. Meanwhile, you prevent acid spills and toxic fumes that seep out.

Generally speaking, no rain won’t hurt your trolling motor. I’ve gone out on lakes while it was raining and used the trolling motor. I never had a problem. You have some fishermen concerned that it would lower the lifetime of it, but I don’t see this as an issue. The bigger risk comes from someone coming along and stealing your trolling motor, which is why I use a lock.

With a more expensive trolling motor, you’d want to take every precaution possible, but for a $135 to $200 trolling motor, I don’t find it worth the trouble. No one that I know of has ever reported a problem with the rain hurting their trolling motor. You do have issues like with saltwater, which I highlighted above.

2 thoughts on “What if I Leave My Trolling Motor in the Rain?”